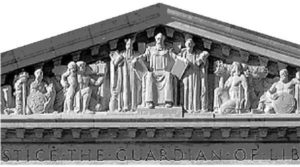 It is the same in maintaining proper land lines and boundaries now. When a surveyor runs a land line he must locate corner stones and run the lines according to them. I have known them to dig up a considerable area in an effort to locate a corner stone, and if it could not be located, they could not proceed with the survey until one was established. Neither was this done by arbitrary means. The surveyor did not just look around and decide on an arbitrary location as being the most likely or pretty close and run from there. Rather he went to where he could clearly locate a corner stone in each direction from the corner to be established and measured in from those stones and established a corner that tied in with the other established corners in the area. The start point is a fixed point that is not negotiable http://library.timelesstruths.org/texts/Remove_Not_the_Ancient_Landmarks/

In a recent article in the Oregonian, titled Inerrancy apocalypse castration—Bible Scholar says not to take Scripture literally, a University of Portland teacher discussed her new book, Permission Granted: Taking the Bible into Your Own Hands. The Oregonian Friday August 28, 2015
The author goes on to say how liberating it was to jettison the notion that all of the Bible is inspired and binding on all of us. I thought, as I read the interview, of a pick-up basketball game a few years back.
A bunch of us mature (older) guys used to meet at the High School before school and relive the glory days. We had cops and teachers and even a few arthritic preachers. We played on the honor system. If you fouled someone it was up you to acknowledge it and say “I fouled you.”
One day I stole the ball and was speeding toward a layup on the other end of the court when Mark caught up with me (I hated Mark…he was younger and his knees still worked…) Just before my ‘film at 11’ game changing play…Mark came down on me like the hammer of Thor. Sprawled out on the court I looked up at him…waiting for him to say “I fouled you.” Instead he waxed philosophical and said, “In my reality that wasn’t a foul.” I said to him later. “You’re right that wasn’t a foul…it was a felonious assault!”
Back to the subject of landmarks. It is interesting to me that journalists invariably start any reportage of a Supreme Court decision by saying, “In a landmark decision today, the court decided….” The issues of Gay Marriage, The Affordable Care Act, and The Roe v. Wade ruling can be called landmark decisions.
At the U.S. Supreme Court Building, The Ten Commandments are located in several different places including on the carved stone frieze on the front of the building. The statue shows Moses leaning his arm on The Ten Commandments. The commandments are also on the wall above the judge’s courtroom bench.
It would appear that the Justices must now want the authority conveyed by the image of Moses giving God’s law but reserve unto themselves the right the make decisions on laws based on the culture and the perceived opinions of men. Is it any wonder that we are on the verge of anarchy because there is no standard (time tested reliable standard) by which we make decisions about what is right and just and fair?
I remember a TIME magazine cover on which there was picture of the first page of the U.S. Constitution being run through a paper shredder. The title was “Does it Still Matter?” We can speak in generalities and mouth platitudes about tolerance but when our neighbor starts to put his lawn gnomes and pink flamingos in our back yard…then it is down to County Title Office we go to find out exactly where the corner of our property is located. 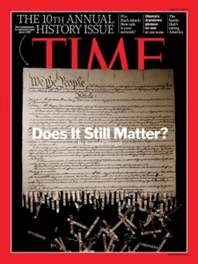 In my book Fatal Drift-Is the Church Losing its Anchor? I make the point that our culture has lost its anchor because we have not only removed the ancient landmarks–we have actually repudiated the notion that they even existed in the first place.
Every dictator in history at one time or another appealed to an ancient landmark to justify his conquest and seizure of territory…think Hitler and Stalin. What is the modern crisis in the Mideast about if not the redress of perceived wrongs to do with landmarks and territory?
I for my part want a return to the ancient landmarks. It is the only way to restore some semblance of order in this lawless age. C.S. Lewis rightly observed, “A wrong sum can be made right…but never by merely going on.”
Dr. J.